SleepyCrypt: Encrypting a running PE image while it sleeps

In the course of building a custom C2 framework, I frequently find features from other frameworks I’d like to implement. Cobalt Strike is obviously a major source of inspiration, given its maturity and large feature set. The only downside to re-implementing features from a commercial C2 is that you have no code or visibility into how a feature is implemented. This downside is also an learning excellent opportunity.

One such feature is Beacon’s ability to encrypt its loaded image in memory while it sleeps. It does this to prevent memory scanning from identifying static data and other possible indicators within the image while Beacon is inactive. Since during sleep no code or data is used, it can be encrypted, and only decrypted and visible in memory for the shortest time necessary. Another similar idea is heap encryption, which encrypts any dynamically allocated memory during sleep. A great writeup on this topic was published recently by Waldo-IRC and is available here.

So I set out to create a proof of concept to encrypt the loaded image of a process periodically while that process is sleeping, similar to how a Beacon or implant would.

To get an idea of the challenges we have to overcome, let’s examine how an image is situated in memory when a process is running.

During process creation, the Windows loader takes the PE file from disk and maps it into memory. The PE headers tell the loader about the number of sections the file contains, their sizes, memory protections, etc. Using this information, each section is mapped by the loader into an area of memory, and that memory is given a specific memory protection value. These values can be a combination of read, write, and execute, along with a bunch of other values that aren’t relevant for now. The various sections tend to have consistent memory protection values; for instance, the .text sections contains most of the executable code of the program, and as such needs to be read and executed, but not written to. Thus its memory is given Read eXecute protections. The .rdata section however, contains read-only data, so it is given only Read memory protection.

Why do we care about the memory protection of the different PE sections? Because we want to encrypt them, and to do that, we need to be able to both read and write to them. By default, most sections are not writable. So we will need to change the protections of each section to at least RW, and then change them back to their original protection values. If we don’t change them back to their proper values, the program could possibly crash or look suspicious in memory. Every single section being writable is not a common occurrence!

How Can You Run Encrypted Code?

Another challenge we need to tackle is encrypting the .text section. Since it contains all the executable code, if we encrypt it, the assembly becomes gibberish and the code can no longer run. But we need the code to run to encrypt the section. So it’s a bit of a chicken and the egg problem. Luckily there’s a simple solution: use the heap! We can allocate a buffer of memory dynamically, which will reside inside our process address space, but outside of the .text section. But how do we get our C code into that heap buffer to run when it’s always compiled into .text? One word: shellcode.

I know we all love writing complex shellcode by hand, but for this project I am going to cheat and use C to create the shellcode for me. ParanoidNinja has a fantastic blog post on exactly this subject, and I will borrow heavily from that post to create my shellcode.

But what does this shellcode need to do exactly? It has two primary functions: encrypt and decrypt the loaded image, and sleep. So we will write a small C function that takes a pointer to the base address of the loaded image and a length of time to sleep. It will change the memory protections of the sections, encrypt them, sleep for the configured time, and then decrypt everything and return.

Putting It All Together

So the final flow of our program looks like this:

Since it’s the simplest, let’s start with a rundown of sleep.exe.

First off, we include the shellcode as a header file. This is generated from the raw binary (which we’ll cover shortly) with xxd -i shellcode.bin > shellcode.h. Then we define the struct we will use as a parameter to the shellcode function, which is called simply run. The struct contains a pointer for the image base address, a DWORD for the sleep time, and a pointer to MessageBoxA, so we can have some visible output from the shellcode. In a real implant you would probably want to omit this. Lastly we create a function pointer typedef, so we can call the shellcode buffer like a normal function.

Next we begin our main function. We take in a command line parameter with the sleep time, dynamically resolve MessageBoxA, get the image base address with GetModuleHandleA( NULL ), and setup the parameter struct. Then we allocate our heap buffer and copy the shellcode payload into it: 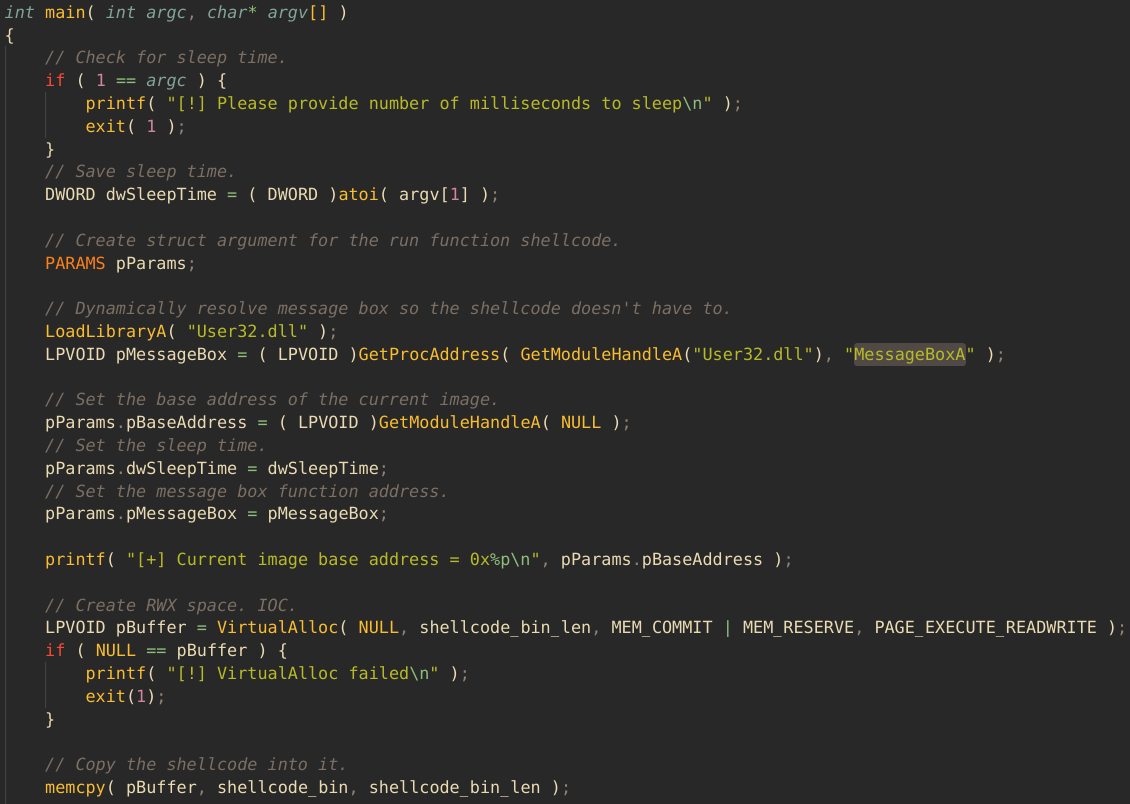 Finally we create a function pointer to the shellcode buffer, wait for a keypress so we have time to check things out in Process Hacker, and then we execute the shellcode. If all goes well, it will sleep for our configured time and return back to sleep.exe, popping some message boxes in the process. Then we’ll press another key to exit, showing that we do indeed have execution back in the .text section.

Now we write the C function that will end up as our position-independent shellcode. ParanoidNinja covers this pretty well in his post, so I won’t rehash it all here, but I will mention some salient points we’ll need to account for.

First, when we call functions in shellcode on x64, we need the stack to be 16 byte aligned. We borrow ParanoidNinja’s assembly snippet to do this, using it as the entry point for the shellcode, which then calls our run function, then returns to sleep.exe.

Next we need to consider calling Win32 APIs from our shellcode. We don’t have the luxury of just calling them as usual, since we don’t know their addresses and have no runtime support, so we need to resolve them ourselves. However, the usual method of calling GetProcAddress with a string of the function to resolve is tricky, as we already need to know the address of GetProcAddress to call it, and using strings in position-independent shellcode requires them to be spelled out in a char array like this: char MyFunc[] = { 'h', 'i', 0x0 };. What we can do instead is use the tried and true method of API hashing. I have borrowed a custom GetProcAddress implementation to do this from here, combining it with a slightly modified djb2 hash algorithm. Here’s how this looks for Sleep and VirtualProtect:

Now that we’re able to get the function pointers we need, it’s time to address encrypting the image. The way we’ll do this is by parsing the PE header of the loaded image, since it contains all the information we need to find each section in memory. After talking with Waldo-IRC, it turns out I could also have done with with VirtualQuery, which would make it a more generalizable process. However I did it the PE way, so that’s what I’ll cover here.

The first parameter of our argument struct to the shellcode is the base address of the loaded image in memory. This is effectively a pointer to the beginning of the MSDOS header. So we can use all the usual PE parsing techniques to find the beginning of the section headers. PE parsing can be tedious, so I won’t give a detailed play by play, just the highlights.

The last piece of information about the section we need is the memory protection value. This is stored in the Characteristics field of the section header. This is a DWORD value that looks something like 0x40000040, with the left-most hex digit representing the read, write, or execute permission we care about. We do a little more bit twiddling to get just this value, by shifting it to the right by 28 bits. Once we get this value by itself, we save it in an array indexed by the section number so that we can reuse it later to reset the protections: 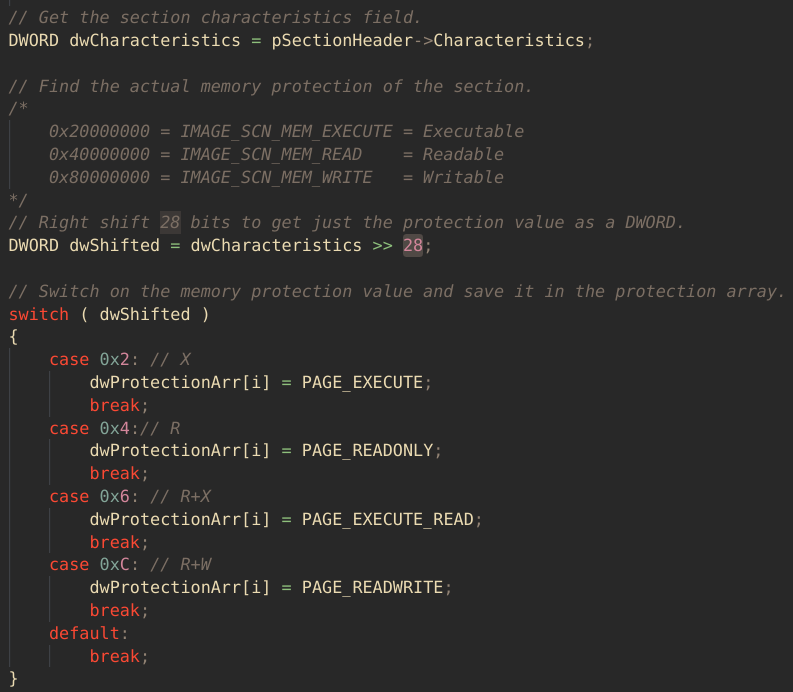 Now that we can find each section, know its size, and can restore its memory protections, we can finally encrypt. In the same loop where we parsed each section, we call our encryption function:

The encryption/decryption functions take the address, size, and memory protection to apply, as well as a pointer to the address of the VirtualQuery function, so that we don’t have to resolve it each time: 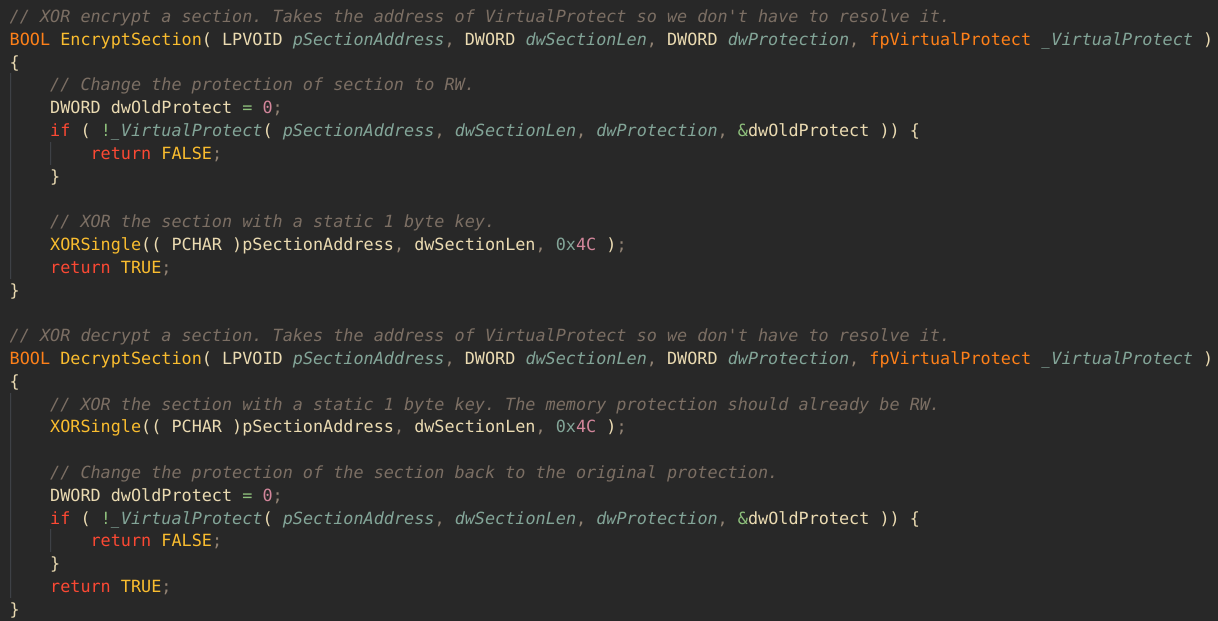 To encrypt, we change the memory protections to RW, then XOR each byte of the section. Once we have encrypted each section, we finish by encrypting the PE headers. They reside in a single 4k page starting at the base address. With that, the entire loaded image is encrypted!

Once we’ve finished sleeping, we decrypt everything. We have to make sure that we decrypt the PE headers page first, because we use it to find the addresses of all the other sections. Then we pop a message box to tell us we’re done, and return to sleep.exe!

ParanoidNinja covers this part in detail as well, but briefly the process is this:

To verify everything is being encrypted and decrypted properly, we can use Process Hacker to inspect the memory. Here I’ve called sleep.exe with a 5 second sleep time. The process has started, but since I haven’t pressed a key, everything is still unencrypted: 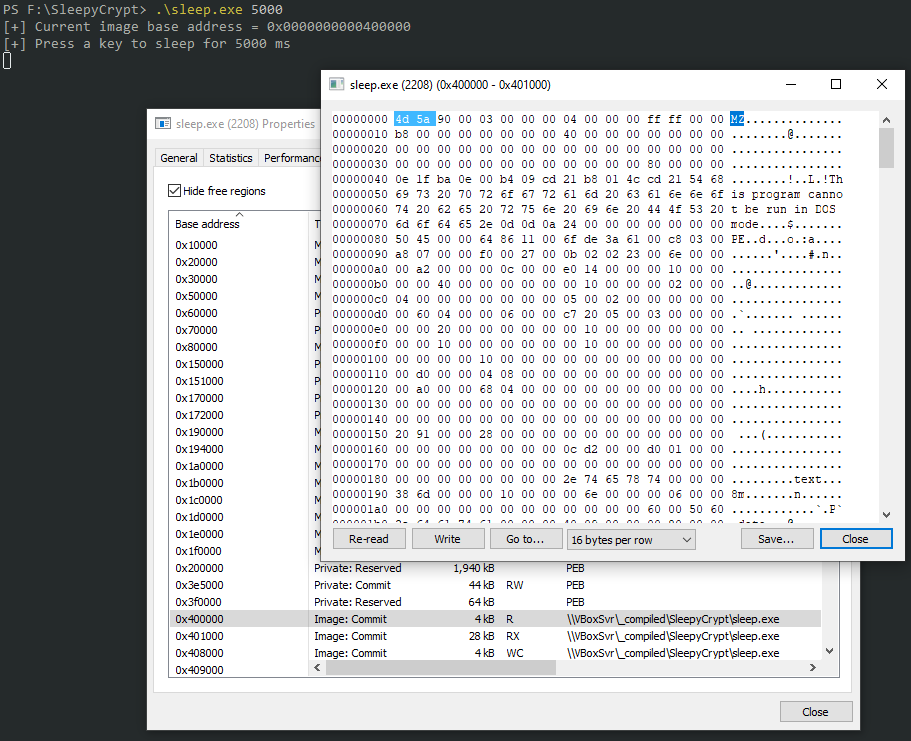 Here I have pressed a key and the encryption process has started. I have pressed “Re-Read” memory in Process Hacker, and you can see that the header page has been XOR encrypted: 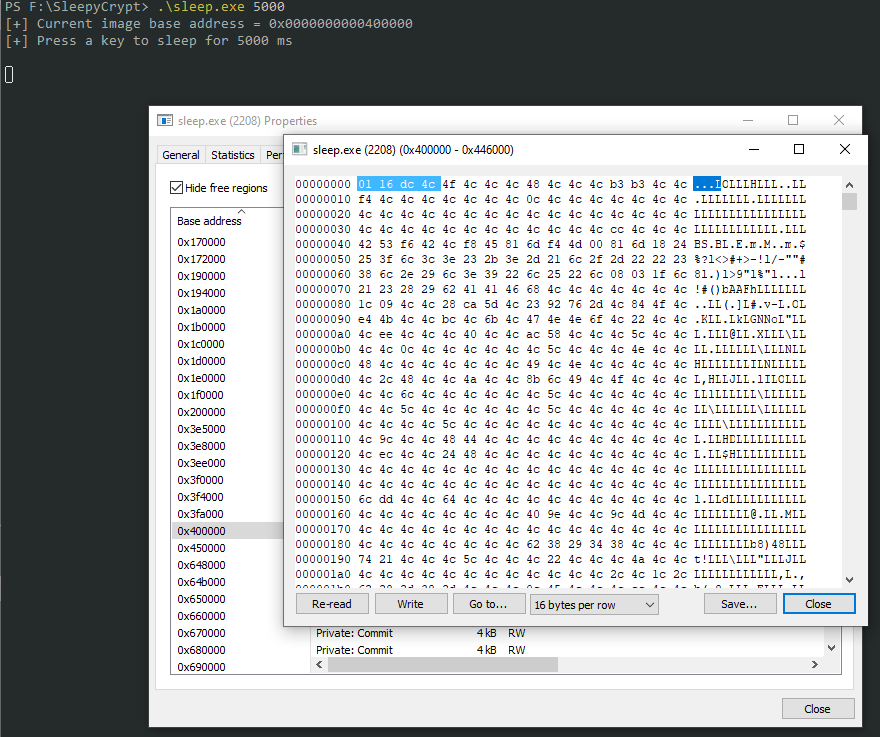 After the sleep is finished and decryption takes place, we get a message box telling us we’re done. Once we refresh the memory in Process Hacker, we can see we have the PE header page back again! 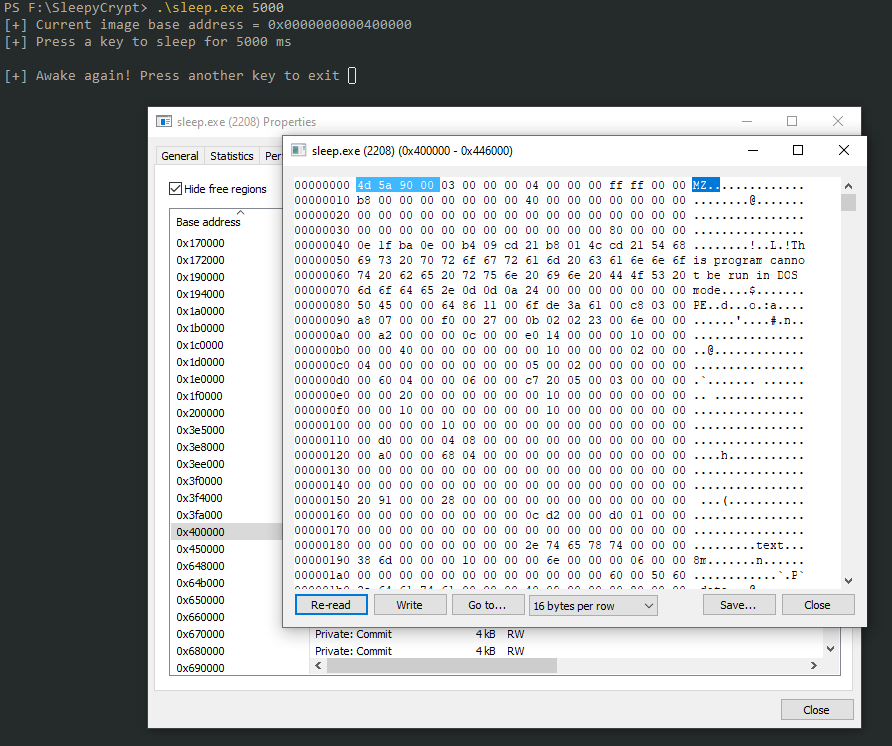 You can repeat this with each section in Process Hacker and see that they are all indeed encrypted.

I find it really educational to recreate Cobalt Strike features, and this one was no exception. I don’t know if this is at all close to how Cobalt Strike handles sleep obfuscation, but this does seem to be a viable method, and I will likely tweak it further and include it in my C2 framework. If you have any questions or input on this, please let me know or open an issue on Github.